Listen to both parts in one consolidated mp3 here.

Listen to both parts in one consolidated chunk (minus the music) here.

The Decline and Fall of Western Art – https://amzn.to/2NxJRTZ

Bibleman – Bibleman vs. the Prince of Pride
https://www.youtube.com/watch?v=Sh0xCasDU3U

The Bibleman Adventure: The Six Lies Of The Fibbler

S08E02
The Truth behind Christian Rock: according to Hank Hill (Season 8 Episode 2: Reborn to be Wild)

Sam Dickson: “Through a Glass Darkly”

“Liar, lawyer, mirror for you, what’s the difference?

Kangaroo be stoned. He’s guilty as the government.”
https://www.youtube.com/watch?v=2xV93TlPv1M

Obama is board of directors for Netflix
https://www.businessinsider.com/netflix-backlash-barack-michelle-obama-deal-conservatives-2018-5

( This is only meant for educational purposes; to analyze subcultures. )

The Decency – “It’s Okay To Be White”

In honor of DJ Jabberwocky Jeff, let’s analyze the music video for “Fog.”

To avoid spoilers, watch the video first and try to soak it all in making your own connections:

Okay, now scroll down and let’s see if you can pick up what I’m layin’ down.

Since my conclusions are largely subjective and most likely not the intended message of the artist, let’s start with overt stuff first and then work our way down to the small details.  Clearly, the rainbow glasses are meant to symbolize a difference in the characters’ perception. So for us “redpilled” people, the first thing that comes to mind is the multi-culti “diversity is our greatest strength” philosophy many Boomers are blinded by. Or “clown world” if you must. 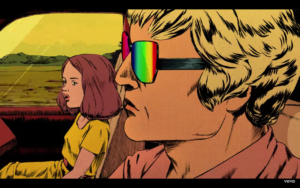 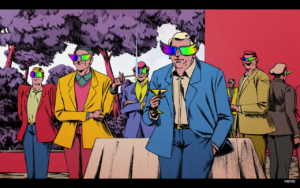 Initially, I thought all the drug use was just a statement on degeneracy. Hedonistic elites partaking in increasingly depraved forms of pleasure, to the point where they sacrifice a child. This still seems to be the case, but upon several viewings I realized that the one drooling is perhaps implied to be the little girl’s mother? Maybe she was drugged up to be willing to go along with it? We all know that often porn stars are groomed (our scouted) so that their drug addiction can be used to turn them into a borderline slave. When we think about the modern Western female who cheers about abortion, and brags about being a selfish alcoholic, it hits close to home… 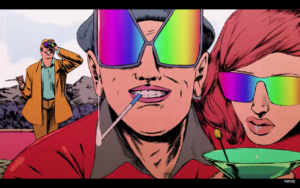 Her hair color and bone structure matches the little girl’s, whereas the woman driving the car at the beginning was blonde, had different bone structure, was potentially grandma age, and was being eyed suspiciously. Tough to say. Maybe just confirmation bias. Either way, the conclusion can be the same: selfish hedonism at the expense of the youth. We’ve seen this countless times in the past couple years: Ebba Åkerlund, Mollie Tibbits, Desmond is Amazing, etc. Parents and governments failing to protect their progeny. 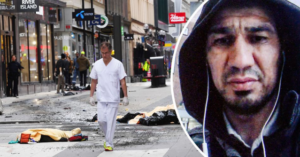 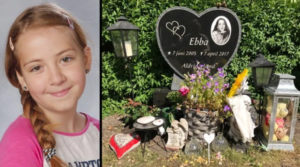 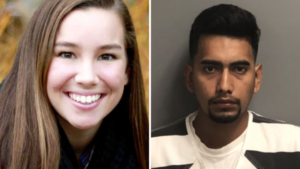 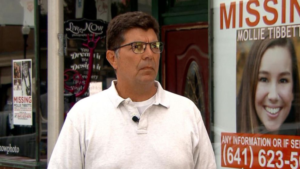 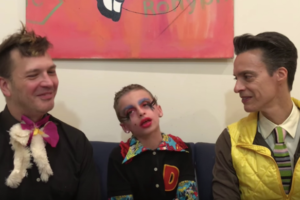 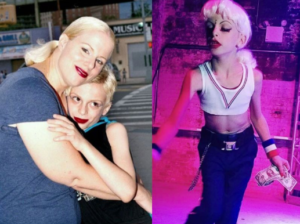 But it’s not just failing to protect. In many instances, these policies are sadistic, intentional, and methodically implemented. Surely you’re aware of the (((elites))) that are the worst proponents of this, but the crowd in the animation didn’t have a semitic vibe to me. I got more of a traitor vibe. Like how the Labour Party wanted to make the UK more multicultural to “rub the Right’s nose in diversity.”  This pleasure is apparent with scenes like the schadenfreude peek, and the group making fun of the girl’s demise outright. 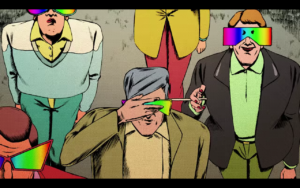 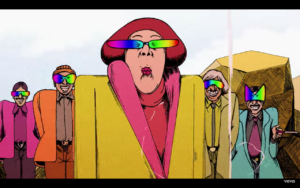 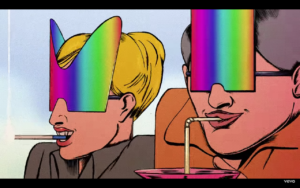 Along the same lines of the traitor yuppie theme, we could interpret the umbrellas as ways of showing how sheltered these people are: 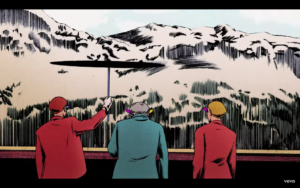 We never see this guy’s face, so maybe it’s a George Soros figure. But it definitely seems like the hypocritical EU posh c**ts who live in gated communities but advocate for open borders so long as they can keep their cheap maids:

Which is not just a left v.s. right thing. Take a look at this guy: 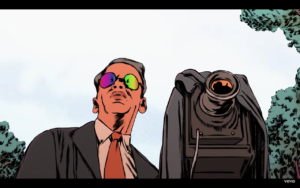 Remind you of Reagan too? He’s older than the other people at the event and seems to be dressed more conservatively. Furthermore, he doesn’t seem too excited. I highly doubt the Reagan likeliness was what the artist was going for, but perhaps he represents a similar kind of person out in France (where the artist is from). The apathetic old guard, establishment type, with no spine left. Probably the kind of person opposed to the activities on display, but willing to compromise on almost anything so long as they can avoid losing face or putting themselves in harm’s way. 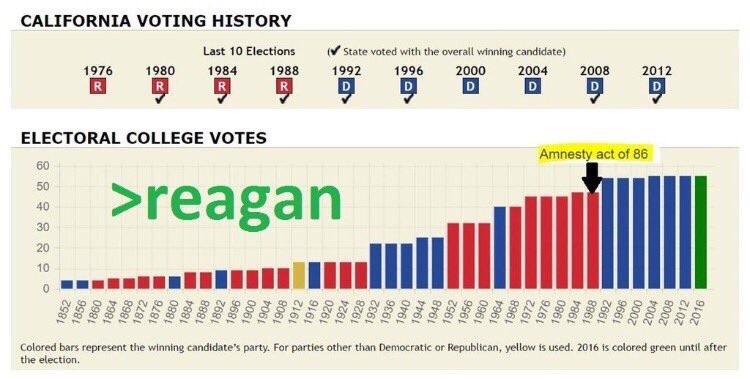 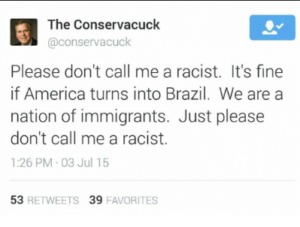 Although, we always have to be careful with analyzing art, because sometimes you listen to the director’s commentary and you find out that they made decisions purely for aesthetic or logistical reasons. Or often they have a really shallow understanding of politics and just want to attack capitalists.

Nevertheless, upon the second or third viewing, the fact that the girl was trying to hide her underwear seemed to complete the multi-culti sacrificial lamb analogy. Boomers throughout the Occident are literally letting their daughters get raped by migrants for the sake of this egalitarian experiment. Rotherham, Cologne, Stockholm, etc. 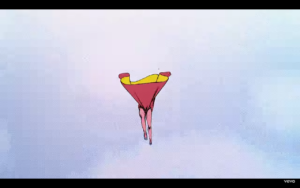 Likewise, this next shot may be a stretch, and it’s probably just the artist setting the atmosphere of a mountain road, but it’s worth noting that Alfred Hitchcock famously used the footage of a train going through a tunnel to symbolize sex. 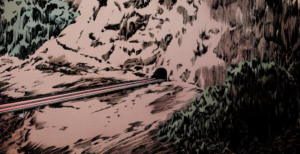 And lastly, this final photograph. Probably just a cool way to end the music video. But I like to interpret it as a way to show that we are living in the calm before the storm. Many of us in the Dissident Right can see the writing on the wall. And as they say, “History may not repeat, but it rhymes.” This bizarre experiment of cramming drastically different peoples into one spot is realistically gonna’ reach a boiling point sooner than later. The browning of America and Europe means that the middle class working whites who sustain the empire will soon become a minority. Something’s gotta’ give. 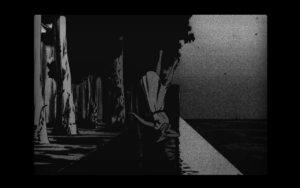 The bright side of this snapshot? A reminder that we’re living through history. This is a huge fork in the road for Western civilization. Embrace the struggle, and if you’re great enough you can make it into the history books. Are you the type to view this photo as depicting the inevitable death of a girl/civilization? Are you fatalistic and think we need to rise like a phoenix from the ashes? An inevitable cycle we must endure? 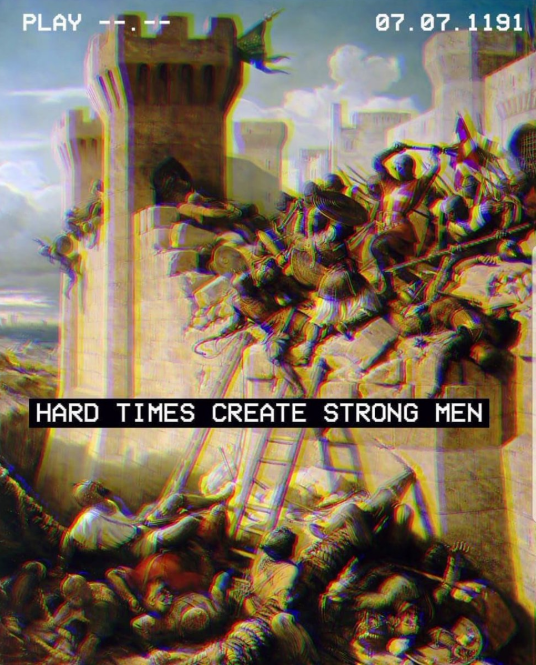 Or are you the type who sees this photo and imagines a man barely out of the shot, just about to dive in and save the child? 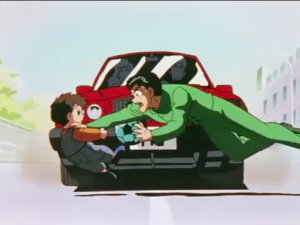 The Copyright Laws of the United States recognizes a “fair use” of copyrighted content.  Section 107 of the U.S. Copyright Act states:

“Notwithstanding the provisions of sections 106 and 106A, the fair use of a copyrighted work, including such use by reproduction in copies or phonorecords or by any other means specified by that section, for purposes such as criticism, comment, news reporting, teaching (including multiple copies for classroom use), scholarship, or research, is not an infringement of copyright.”

This podcast and our website in general may contain certain copyrighted works that were not specifically authorized to be used by the copyright holder(s), but which we believe in good faith are protected by federal law and the fair use doctrine for one or more of the reasons noted above.